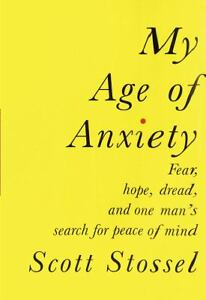 This is the third book in my series of posts about Seattle Public Library’s 2019 Book Bingo. For the “book about disability” square, I read My Age of Anxiety, by Scott Stossel.

Is anxiety a “disability?” It’s impossible to read this book and come away thinking the answer is categorically “no.” The anxiety Stossel describes is all-consuming, incapacitating, reason-destroying. One of his stated goals in writing My Age of Anxiety was to better understand the nature of his affliction, and thereby better cope with it. On the evidence of what’s between the covers of the book, it didn’t work. In several places Stossel recounts feeling himself start to be consumed by anxiety and trying to fend it off with his knowledge of the underlying neurochemistry or the long history of fellow eminent sufferers of his condition, only to watch himself crumble under the sway of his hyperactive amygdala all the same.

Scott Stossel’s knowledge of anxiety that I alluded to in the last paragraph is considerable. Somewhat unusally for the kinds of books I usually read, My Age of Anxiety has 40 pages of citations and bibliography, and an index. Its scope is broad, spanning hundreds of years of historical perspectives on anxiety across multiple disciplines: psychology, neuroscience, sociology, philosophy and evolutionary biology, among others, all have their say. The only axes along which I noticed a pretty narrow focus were those of culture and geography: Stossel mentions a study here and there which compares anxiety between different populations, but for the most part the book focuses on the white Anglo-Saxon world, somewhat to its detriment. I would have liked more about how anxiety manifests and is studied and perceived in other cultures, and less minutiae about the various abstruse synaptic chemical reactions and particular genes that give rise to or inhibit anxiety. Stossel is an entertaining and good-humored writer, but he couldn’t totally keep this material from being dry in places. With scant background knowledge of or interest in neuroscience or genetics, I have little patience for passages such as “The first gene, known as COMT, is found on chromosome 22 and encodes the production of an enzyme (catechol-O-methyltransferase) that breaks down dopamine in the prefrontal cortex of the brain,” and this book is littered with such disconnected, jargon-heavy factoids that leave my brain the minute I finish reading them.

My Age of Anxiety can get pretty textbooky. But Stossel sprinkles it with personal context or anecdotes that often humanize the academic bits while also letting his personality and sense of humor shine through a little more. The anecdotes include several of what are, it must be assumed, some of his most dramatic encounters with anxiety and panic. They are vicariously mortifying and often excruciating even to read, and they lend a convincing sense of urgency to what must have been a pretty intense search for understanding.

I have quibbles about the weight given to different perspectives and topics in My Age of Anxiety. Besides the aforementioned eye-glazingly dense passages and scant acknowledgement of different cultures, mentioned above, I wanted less about Freud’s more archaic nonsense, less about genetics, and more about anxiety from a modern therapeutic or psychological perspective — more, in short, from Stossel’s current and former therapists Drs. W. and L. Both seem to take the optimistic view of neural plasticity and assert we can rewire our own brains even in adulthood and even without the drugs on which Stossel spills quite a lot of ink. Part of this, admittedly, is probably because my family has its own history of dysfunctionality that I don’t want to be genetically beholden to and am working to subvert. I crave that message of self-determination. But I also felt like the up-to-date psychological perspective on emotional regulation got short shrift.

That aside, I’d still recommend this book; it’s very readable and even sort of grimly hilarious at times, and chock full of information about anxiety throughout history and through lots of different lenses. Just be clear, going into it, that it’s mainly a historical treatment of the topic, not a survey of current thought. I think the book jacket is pretty clear on that, but it’s possible I got a little lost in my own hope for what I might be able to get out of it.

I’m a big fan of erstwhile writer David Foster Wallace (RIP), who’s mentioned twice in My Age Of Anxiety, and Scott Stossel’s descriptions of the self-reflexive nature of social anxiety reminded me very strongly of DFW’s writings on the same or similar topics. Compare for example this passage from My Age of Anxiety:

The terrible irony of social phobia is that one of the things people suffering from it fear most is having their anxiety exposed — which is precisely what the symptoms of this anxiety serve to do. Social phobics worry that their interpersonal awkwardness or the physical manifestations of anxiety — their blushing and shaking and stammering and sweating — will somehow reveal them to be weak or incompetent. So they get nervous, and then they stammer or blush, which makes them more nervous, which makes them stammer or blush more, which propels them into a vicious cycle of increasing anxiety and deteriorating performance.

with this, DFW’s description of a character, David Cusk, with deathly anxiety about public sweating, from his posthumous The Pale King:

For there were, by this time, degrees and gradations of public sweating, from a light varnish all the way up to a shattering, uncontrollable, and totally visible and creepy sweat. The worst thing was that one degree could lead to the next if he worried about it too much, if he was too afraid that a slight sweat would get worse and tried too hard to control or avoid it. The fear of it could bring it on. He did not truly begin to suffer until he understood this fact, an understanding he came to slowly at first and then all of an awful sudden.

The comparisons between Stossel’s and DFW’s descriptions of anxiety don’t end there. Both Stossel (in describing his emetophobia, or fear of vomiting) and Cusk are aware of the absurdity of their phobia and totally uncomforted by that absurdity. That awareness of the absurdity also leads both Stossel and DFW to go to great lengths to convey the inner workings of a person experiencing an anxiety-induced panic attack, and the similarities between their descriptions are enough to make it pretty clear that it wasn’t the breadth of DFW’s imagination that enabled him to write about anxiety so vividly.