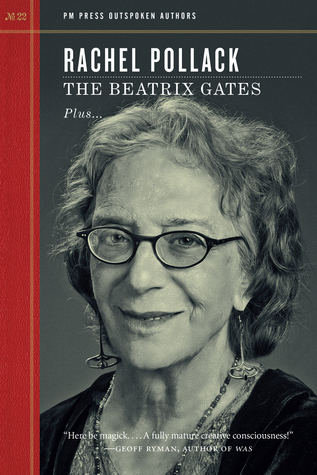 This is the second in a series of posts about books I read for Seattle Public Library’s Book Bingo. For the “Challenges your world view” square, I read The Beatrix Gates, by Rachel Pollack.

Content warning: The Beatrix Gates is very heavy on issues of transgender identity. That’s not the content warning, hold your horses. The content warning is that I’m a cis man and I’m going to write about transgender issues in the process of discussing this book. I’m 100% supportive of the right of everyone to live as their chosen gender or to reject the gender binary entirely, so I’m not going to be coming in hot with some bigoted shit here, and I think my understanding of how to talk about gender stuff respectfully is reasonably solid. But I’m still cis and I haven’t lived it; I may slip up, and even if I don’t, probably any thoughts I have will be 101-level and it’s best to consider my audience to be other cis people.

Technically the book I read is titled “The Beatrix Gates, Plus…” as it contains the title story and two others, as well as a nonfiction personal essay, Trans Central Station, and an interview with the author. But I want to talk about the title story first.

My main exposure to trans people has been on the social network Mastodon, which is a relatively accepting internet space and so attracted lots of folks who wanted to get away from all the Nazis that Twitter happily embraces telling them they ought to be holocausted or whatever Nazis like to say these days. The Beatrix Gates has a vibe that I’ve seen from some people on Mastodon and which I can only describe, approvingly, as “trans supremacy.”I know that, especially with all the aforementioned Nazis that seem to be around these days, “supremacy” is a loaded term. But I don’t think “trans supremacy” is a problem like white supremacy is, for basically the same reason that I don’t think “punching up” is a problem in comedy. In fact I think it’s a great thing for marginalized people not to settle for the scraps the majority is willing to throw to them, or for merely being regarded as human in the way that the majority takes for granted, but to recast the things they’re marginalized for as strengths and celebrate them.


The running theme of trans supremacy, which I should re-emphasize that I made up, is that trans people confront and seize control of their own biology— even if they don’t medically transition — in a way that cis people generally don’t even contemplate. I’ve generally been ambivalent about my gender — American masculinity has a whole lot of problems I don’t want to cozy up to — but still, while reading Mastodon recently, I was struck by the realization that at the age of 36 I’d never asked myself: am I actually a man? I’m pretty sure the answer is yes, but the point is how long it took me to ask. Trans people can’t live on gender autopilot in the way that I did for most of my life. They have to wrestle with the question of how to live authentically in the bodies they were born with, or change those bodies to better align with how they feel. I’ve seen trans people on Mastodon who seem to have struggled with that and, at least somewhat, overcome it, and it seems like that struggle made them more comfortable in their skin than most cis people I know.

In Trans Central Station, Rachel Pollack devotes a couple of pages to looking at how the meaning of the prefix “trans-” pertains to transgender experience in some other words in which it appears: transport, transparent, transmission, and so on. But one she leaves out, and which seems most relevant to The Beatrix Gates, is transcendence. The Beatrix Gates asks: if trans people are able to transcend their assigned gender, what else might they be able to transcend? It answers: how about mortality? This passage, which encapsulates my idea of trans supremacy as well as any I’ve seen, explains how this came to be:

The nons—the non-transsexuals… wanted their nan-o-ma-chines [sic] to make them better, to cure their sicknesses and keep them young, and make everyone pretty, but not different. They didn’t want to stop being who they were, or thought they were, to become seriously new.

That notion of embracing technology to become something new seems to draw a lot of trans people to cyberpunk, which although it’s usually dystopian is also incredibly rich with possibility for body modification. But The Beatrix Gates isn’t a cyberpunk story; instead, its central story of how its trans people achieved immortality takes up about half its length and is told as a sort of fairy tale or parable. This, along with a looser theme of mortality, seems to be the thread that unites Gates and the two other stories that make up this micro-compilation. The Woman Who Didn’t Come Back is fully framed as a myth explaining how women had and then lost a kind of immortality, or at least a second life. Burning Beard is a retelling of the Biblical story of Joseph, at the end of his life and remembering how his divine visions have shaped it. They’re fine enough stories but I didn’t get a lot out of them. As well, Pollack’s apparently longstanding expertise in shamanism and the Tarot which she discusses in Trans Central Station didn’t really have an impact on me; her somewhat brief and superficial treatment of it made me feel like there was background knowledge I needed to have in order to understand its import.

So I think the real draw here is Rachel Pollack’s thoughts about what it means to be transgender in The Beatrix Gates and Trans Central Station. She acknowledges the struggle to be recognized and accepted but presents being trans as much more than that struggle; she reflects on history but, through science fiction, gives us powerful visions of a future as well. This book is a quick read, and I’d recommend it to just about anyone, but particularly to cis people open to a different perspective on engaging with gender. I couldn’t find a way to fit it into the above, but I’ll leave you with this quote, which struck me the most as a cis person:

With the wrong language, one of strict categories and confinement, the world becomes a fake, a stage set whose actors don’t know they are in a play… Most people do not notice this becaue their own sense of self, of language, more or less fits the received version of existence. They still suffer, for in a world of strict and very limited categories they must constantly check themselves against the model of a “real man” or a “real woman.” The ones who reveal the fake are the ones who simply cannot make themselves fit.