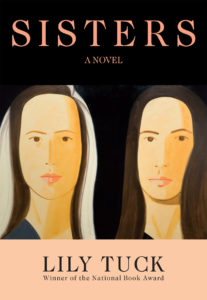 This is the fourth book in my series of posts about Seattle Public Library’s 2019 Book Bingo. For the “single-word title” square, I read Sisters, by Lily Tuck. This post will include significant spoilers.

Sisters was the first of two books that I read strategically in order to get a bingo with minimum effort, by choosing it from a table in my local library that had a selection of books tagged with bingo square categories. Conveniently, Sisters is also very short. Ordinarily I don’t favor short books, but for Book Bingo’s official duration (till September 3) I’m on a tight deadline.

Short though it may be, Sisters packs a lot of subtext into its 150 pages. It’s narrated by a second wife who is more or less constantly aware of herself as such, told as a fragmentary but loosely intertwined series of vignettes ranging in length from a few pages down to a single sentence. Those vignettes paint a picture of the main character that’s vivid in some ways and frustratingly hazy in others, though the haziness — and, for that matter, the frustration — seem to be by design.

Sisters’ nameless narrator is cagey, difficult for the reader to feel much real affection for. She gives the impression of being unreliable mainly by virtue of what she elides or otherwise obscures: she digresses into academic tangents, relates anecdotes but stops short of telling us why they matter or what they mean to her, and indulges in (seeming) non sequitur allusions to literature and historical events.

The most on-the-nose of these allusions, to someone at my level of well-read-ness“Moderately.”

, is tossed off at the beginning of the narrator’s recounting a dream.

At this point, the narrator has demonstrated a preoccupation with her husband’s first wife that makes her affinity with the second Mrs. de Winter of Rebecca quite clear. But unlike Rebecca, whose malign influence that story’s narrator seems unable to escape, Sisters’s first wife seems just to be trying to mind her own business. The narrator’s obsession with her, whether amusing herself with Fermi questions about how many times “she”It doesn’t seem possible to discuss this book without mentioning the narrator’s consistent stylistic quirk of referring to the first wife as “she”, always in italics. I found the seething undercurrent lent by this to be somewhat at odds with the narrator’s actual tone when discussing the first wife, which generally fell somewhere between curiosity and mild intimidation, but given the narrator’s capacity for self-deception that dissonance could certainly have been intentional. It’s also notable that she is italicized only as the subject; the narrator never refers to her as “her.”

and her ex-husband “fucked” or going out of her way to grocery shop in her neighborhood, hoping to run into her, seems entirely self-inflicted.

In an early apparent non sequitur, the narrator compares the first wife’s “Grecian nose” to that of Michaelangelo’s David and then somewhat incongruously tells us the precise height and weight of David, both of which are considerable. Revisiting the novel in order to write this post, I realized these trivia are a cheeky reference to the actual way the first wife looms over the narrator’s life and the gravity she exerts on the narrator’s thoughts. But it’s not clear whether the narrator herself is aware of this or whether she retreats into statistics as a distraction — and, if the latter, it’s also an open question whom she’s trying to distract.

The plot of Sisters, such as it is, hangs on the narrator’s relationship with the family she married into, with some spicy will-they-or-won’t-they-or-did-or-didn’t-they questions of infidelity to add a little intrigue. But the fill-in-the-blanks plot mainly serves to highlight the narrator’s preoccupations and insecurity. The few candid looks we get at her interactions with her husband don’t encourage us to view the marriage itself as particularly special or worth preserving, and the scenes where we see her with her stepchildren can mostly be characterized as “cordial.” And the narrator herself engages in so much diversion and throws up so many smokescreens that it’s hard to get enough of a handle on her to care very deeply about her.

The book’s title refers to the quote in its preamble, “First and second wives are like sisters.” There are ways in which its narrator relates to her husband’s first wife as one might a sister: as a rival, an intimidating presence, an object of envy and admiration. But she doesn’t seem to be able to find it in herself to relate to her as a person. In the wake of the divorce that concludes the book — which by that point comes as no great surprise — the narrator declares her intent to reach out to her once more, in a way that perhaps better acknowledges her humanity and may start to put them on more of an equal footing. One can hope that the title will be realized in a meaningful friendship as well. But we don’t get to see the outcome of this phone call, so it’s up to us to weigh the narrator’s capacity for self-deception against our own belief in her capacity for growth, and decide.