This is the first in what will, I hope, be a series of at least 4 entries in this blog about books I read for Seattle Public Library’s Book Bingo. 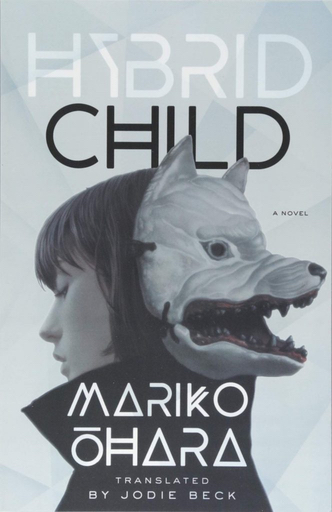 Hybrid Child is by Mariko Ōhara and was originally written in Japanese; I read what I believe is the only English version, translated by Jodie Beck. I picked it up from the library before I noticed Book Bingo was happening, so I was about 150 pages in before I checked and found that the only spot I want to put it in is “Fiction.” That’s an easy one to fill so early, to be sure, but I read plenty of fiction; the point of this for me is to read some things in less familiar categories. So this will hopefully help push me in that direction.

For being in an “easy” category for me, though, this was not a particularly easy book to read. Its disjointed and difficult-to-follow narrative has a lot of very sensuously described gore, violence, and decay as well as an even-more-unpleasant-than-average rape scene and pervasive underlying themes of corporeality and mommy issues (a term that I don’t use lightly).

The main character and titular hybrid child Sample B #3, we learn relatively early on, is an effectively immortal nuclear fusion-powered escaped military weapon who, by consuming part of a living or dead organism, can absorb that organism’s memories and also change shape to mimic it. In the first of the book’s two shorter early sections, Sample B #3 takes a nibble off the corpse of Jonah, a girl who was starved to death and uploaded into a household computer by her insane novelist mother, whilst trying to evade the military unit trying to recapture it. In the second section, again trying to evade the military, Sample B #3 takes a couple-hundred-year vacation into space. When we meet her again, she’s spent so much time “as” Jonah that she’s effectively become Jonah and is referred to as such for the remaining three-quarters of the book.

From that point on, Hybrid Child reads like its plot is mostly there as a framework, and the imaginative characters seem bound together more by thematic material than by an actual coherent event-driven narrative. There’s some kind of interstellar war between humans and a race of machines called the Adiaptron, but the main events of the story take place on a planet called Caritas far from the front lines and none of the main characters seem terribly interested in the outcome… aside from the intermittently nearly-incorporeal ultimate strategist admiral guy who is born an 800-year-old manYes, the birth is described in gruesome, harrowing detail.

destined to lead humanity to victory in the aforementioned war and lives his life backwards in time, though really this all seems contrived mainly so that he can meet his mother and tell her in advance that she’s going to give birth to him. Just a heads up! There’s Shiverer Mouse, a poor fellow with a degenerative neural disorder who becomes Jonah’s first friend on her return from space and who lives in an ambulatory coffin provided for him by Caritas’s caretaker AI, Milagros, before she started malfunctioning and killing all the inhabitants she used to care for. And there’s his friend Lesiah, a member of a very ambiguously described churchNeon Genesis Evangelion recently landed on Netflix so everyone is talking about it, and Hybrid Child’s superficial and largely aesthetic treatment of vaguely Western-seeming religious material pinged my memories of watching NGE back in college pretty hard.

whose principal deity might be the same entity that lends that 800-year-old military strategist’s life some kind of meaning besides war when he glimpses her in a sort of waking dream.

As with — and probably partly because of — the plot that never really comes together, the preponderance of themes and motifs that seem like the real point of the book never quite gelled into a solid takeaway for me either. One thing is certain: this book has a very troubled relationship with maternity. It expresses that relationship via a convoluted series of events that fold back on each other recursively: Sample B #3, as Jonah, the girl who became her mother’s caretaker as a household AI after being starved to death at that mother’s hands, gives birth (via fission) to a “dragon cosmos,” the interstellar organism inside of which she spends all that time in space, and which then delivers her in turn back on Caritas. Later, Jonah destroys her dragon cosmos daughter/mother in a fit of rage and gorges herself on the corpseHer resulting transformation leads to a fair amount of really uncritically presented fatphobia.

; this seems to be the event that tips Milagros, the maternal caretaker of all Caritas, over the edge from erratic benevolence into homicidal neglect.

I can see the central cycle repeating itself in various forms here, but aside from admiring the clever way the author achieved this (and grimacing at much of how it’s described), it didn’t really resonate with me. And the ending, which resolves everything quite abruptly and in an emptily tidy way, didn’t do anything to illuminate what it’s all really about. A couple of other analyses that I read, one by Bogi Takács from a QUILTBAG+ perspective and one by Rachel Hill that takes a deeper and more traditionally literary look, do a much better job than I at teasing apart some of the novel’s themes, but still don’t really draw out an answer to what I guess is the main question I’m left with: what was I supposed to have learned from this?

Hill’s essay takes a somewhat half-hearted shot at answering this question in its last few paragraphs, but I found it unconvincing. The excerpt she cites as an example of the sort of moral of Hybrid Child reads like it was clipped from a new-age self-help book on its own:

Love was the power of abstraction. It inspired two beings to walk to the same beat and to move closer together. The effect of that power went beyond time, beyond each of their individual attributes, and beyond race or species—like a miracle.

but even in the context of the story it doesn’t fare much better. I suppose my experience may have been attenuated by my sort of reading much of the book through my fingers, but the relationships between the main characters never really seemed to fit that description. The most appropriate part is “like a miracle,” which accurately sums up the ending, but none of the redemption in that miraculous ending really feels earned by the book’s previous events.

All in all, I found Hybrid Child a frustrating read. Despite the disjointed narrative and bewilderingly unfamiliar setting, the plot hung together all right, and I was able to follow it on a surface level far more easily than I expected. But it was still too jumbled to be gripping; I needed more of an emotional experience or beautiful prose or something to really bring it together for me, and the repeated hammering on the same themes made for a fun kind of treasure hunt but didn’t ultimately resonate with me or coalesce into some kind of payoff. It’s undoubtedly a very creative and imaginative work of sci-fi, but the gratuitous material made it very tough to read in places and all the more unsatisfying when whatever larger message it was supposed to be in service of landed with such a thud.