On July 25, 2021, I took a bus to visit my mom for the first time since the pandemic struck and everyone went into lockdown around March 2020. My favorite Blaseball team, the Breath Mints, had just had an incredibly successful in-game election. We’d picked up an amazing four blessings for our team, recruiting legendary pitcher Uncle Plasma to the rotation once again after he was Vaulted following our incredible heist nine seasons back; doubling all RBIs of Rodriguez Internet, one of our most consistent batters; and moving Winnie Hess — our large, powerful horse, by raw stat numbers almost certainly the best player in the Internet League — from our rotation to our lineup so she could take a shot at batting. It was sure to be an exciting Season 24; perhaps we’d even win another championship to go along with the one two seasons ago when we put together probably the best team the Internet League had ever seen.

Almost immediately, the season did prove to be exciting. In her first game batting, Winnie successfully stole home off a single… twice. And in her third game, under the weird shadow of an eclipse across the brilliant colors of the recently supernova’d Sun(Sun), the Breath Mints were incinerated by a rogue umpire and the entire team replaced with the Oxford Paws. In the end, the Mints fans’ mantra “The Breath Mints are immune to consequences” held true, in a perversely limited way. The only two players who had been Breath Mints since season 1, Leach Ingram and Rodriguez Internet, were Fireproof, and so were also the only ones to survive the inferno.

As seen in the spartan text-based interface on the official Blaseball website, the incineration of the Breath Mints happened with no fanfare. In the bottom of the fifth, with two outs and Jode Preston on first, Rodriguez Internet stepped up to bat for the Mints.

Five seconds later, a single message announced the incineration, introduced the Paws, and declared that Leach and Rod would be playing for them now.

Five seconds after that, no one watching the game who didn’t recognize the name Rodriguez Internet would have any idea that the Kansas City Breath Mints had ever existed.

Nowhere has the dichotomy that characterizes Blaseball — between the raw, unsentimental facts of the game and the thriving, passionate community around it — been starker than in the responseThe impact of the incineration was tempered somewhat by an official announcement on the Blaseball Discord at the beginning of the season, which warned: “The community you have built with your teams will not disappear. This is a plot point for this era, not your team disappearing forever on the Discord or the Website.” It took the edge off the shock of the team’s disappearance to know it wouldn’t be forever, but the announcement was vague enough in other respects that there was (and still is) a lot of uncertainty about in what capacity the team would continue to exist.

to the Mints’ incineration on the official Blaseball Discord server. #tic-tactics, the channel normally used for strategy discussion, was repurposed into #sentimints, and accumulated fifteen thousand words of “big sentimental posts” from over a hundred different people about what the community meant to them. A few hundred of those words were mine, but I wouldn’t get a chance to write them for several hours.

When I found out about the incineration, I was in the middle of a board game with my mom and my brother. I had to focus on three quarters of an entire ass game of Wingspan while having complicated and weird feelings about the demise of an imaginary splorts [sic] team. And when I tried to explain why I was so distracted, I found myself at a loss. It was still too fresh, and too weird. I guess that some of what I felt was a kind of grief. But on the other hand, to quote one of the Mints chat’s most beloved memes…

Still, I’d been really looking forward to actually following what was shaping up to be a fun season, with Winnie absolutely stampeding around the bases every chance she got and maybe the rest of the Breath Mints also doing neat things occasionally too. Like when we stole another team’s Party TimePer the Enhanced Party Time rule, instituted in Season 6: “When a team is mathematically eliminated from the Postseason, they’ll have a chance of receiving random permanent stat boosts during their games.”

with our ballpark’s PsychoAcoustics“In Feedback or Reverb, PsychoAcoustics will occasionally Echo one of the Away Team’s mods to the Home Team, for game-long use.”

renovation and got two illegal parties without being eliminated from playoffs yet. Or when Marquez Clark somehow stole home twice in a single inning. Oh, what about when Jon Halifax hit a home run in the top of the ninth that the Equal Sun ruleInstituted in Season 22, the Equal Sun rule stated: “A home run during a game’s final out ties the game.”

made a 20.2-run homer, turning a game that the Mints had been losing 20.3 – 0.1 into a game that we won 20.300000000000001 – 20.3 due to Blaseball’s first and only game-deciding floating point error? And let’s not forget that time in the final game of the season 22 championship, when Leach Ingram came back from ElsewhereIn a type of weather called “Flooding,” players on base would occasionally be swept away. Sometimes they would just return to the lineup, but sometimes they would be swept “Elsewhere” and removed from play for anywhere from a few innings to several seasons.

in the bottom of the 8th and hit a home run to break a tie and give the Mints our first and only championship win!Making this even funnier, the Mints would have won even without that homer, due to the Sun 30 rule, which stated: “When a game enters Extra Innings, both Teams will immediately earn 1 Win.”


These moments were all thrilling on their own, though of course on the Blaseball website, as with the Mints’ incineration, they happened with little fanfare. But they each also drew from and fed back into a rich history from hundreds of previous Blaseball games. Marquez Clark was a once-decent player who’d been reduced to easily the worst batter in the Mints’ lineup by a truly grotesque series of misfortunes 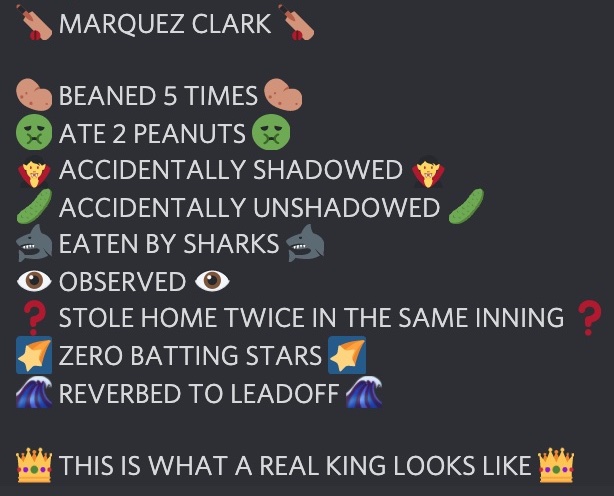 when he pulled off his amazing feat somehow. Jon Halifax was roundly loathed by Breath Mints fans for his general mediocrity and unwanted position as leadoff hitter, but despised even more by the Crabs, who’d foisted him off on us at the beginning of the season… and against whom he hit his record-breaking, unprecedented home run. (All this made it even funnier when he was incinerated in a game shortly later in the same series against the Crabs.) And Leach Ingram, the OG Breath Mint so beloved by fans that I was inspired to write a song about her, was universally understood by the Mints to be a lazy dirtbag whose whole vibe was coasting on as little effort as possible. So her cruising back into the championships after an extended break at almost the last possible moment to hit a series-winning-but-not-really homer was perhaps the most iconic Leach moment in a career full of them. (Leach was also the recipient — or perpetrator? — of one of our two PsychoAcoustics-enabled illicit parties, naturally.)

And so imagine a bunch of nerds in a chat room getting Sports Rowdy during each one of these events, hooting and hollering in text and possibly also real life. Every wild thing that happens to the Mints is grist for the mill of the fans’ creativity and appetite for jokes,Or, in the parlance of the contemporary Internet in general and the Breath Mints chat in particular, “bits.”

and it’s not uncommon to pop into chat and find everyone furiously iterating on some new fever dream of an in-joke (which they will be happy to explain to anyone who’s out of the loop, to the extent that it’s explicable by human intellect). We all know, now, that the concept of a “sports nerd” is not such an oxymoron as was once thought, but Blaseball, with its bare-bones presentation, really encourages the imagination to run wild in a way that the typically stat-centric nature of traditional sports nerdery often doesn’t allow for. And of course, even if stats are what you’re into, Blaseball has plenty of room for that: in addition to everything afforded by the real-world sport it’s based on, one need only recall the 20.3 – 20.3 Mints win to get an idea of the possibilities for trivia opened up by a mutable ruleset and potentially buggy software.

What’s missing from Blaseball the website, I guess, is just that none of the players really have personalities, except as expressed through their gameplay, which in turn is determined by their stats. But that just means that fans have to look elsewhere for the human element. For me — and, I suspect, most people — that means the community of real people following along beside me, cheering for these little boxes of numbers in their simulated games, imagining up the world in which they live in real time.

It’s why my grief at the Mints’ incineration was so weird and qualified and hard to explain. Obviously all the incinerated players were made up, and while I was fond of them and the narrative that the community had constructed around them, I wasn’t overly attached to them. In fact, the Breath Mints’ primer slide deck for new fans (don’t laugh, it’s very helpful!!!) explicitly warns against becoming so:

We want to discourage intense and extreme attachments to players who may get incinerated or stolen at any time. don’t get us wrong–we love our players! but developing them as a community helps us stay grounded in the real reason we’re here–each other.

I can think of no better compliment to the Breath Mints fan community and the people who have worked to shape it than to affirm the truth of this. Blaseball is currently on hiatus for an indeterminate amount of time, probably at least a few months, but the community remains. Without it, all the wild stories that come out of Blaseball are just amusing anecdotes. Experienced in a virtual room full of fellow nerds, they’re cherished memories, opportunities for bonding, seeds of inspiration for bits and stories and music and art. It’s weird and I love it and I can’t wait to see what it looks like when it comes back.

Links to Blaseball games in this post are from the amazing SIBR (Society for Internet Blaseball Research) tool, Before, which is a high-but-not-perfect-fidelity archive of all of Blaseball’s recorded history. Its home page has links to a wide variety of notable Blaseball moments.