It’s the weekend after week 2 of the Foraged and Found Edibles CSA, so time to review what I made with the week’s haul. Since this was the second week it wasn’t quite as thrilling as the first, and I hadn’t yet decided to blog the proceedings, so I forgot to take a picture of the whole spread. I’ll correct this oversight in future installments.

Boy were these inconvenient and gross to clean! The CSA newsletter alluded to this:

Don’t be intimidated by the dirt. Cleaning is easy once you snap off the root base; the outer membrane will simply slip off.

I definitely should have actually read this beforehand, as I did those two things in reverse order, but the experience still would have combined dirt with the sliminess of week-old green onions even had I done it correctly. 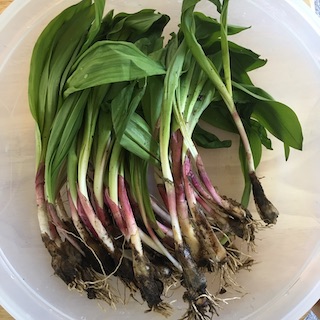 Anyway, once we got them cleaned off, we got some mileage out of these little guys. Some we sautéed with raisins and pine nuts and put over whipped ricotta on toast, using a recipe from Six Seasons (a book will probably appear pretty frequently in this blog series) that is pretty faithfully reproduced here.

A few others went into pesto, more on which shortly. The remainder we dumped into another creamy (but dairy-free) soup whose other main component was mushrooms.

All these things were tasty enough, but I’m not sure they made the differences between ramps and the humble green onion clear to me.

I think we used about a third of this in some compound butter from Six Seasons. The remainder became another pesto, which is turning out to be a wonderful dumping ground for green things I’m not sure what to do with, but which didn’t really let the flavor of the watercress shine like it did with the fennel fronds from last week. My approach to pesto is pretty unsubtle, and it may be that I need to choose the nuts more judiciously or lighten up on the other ingredients if the greens are less strongly flavored or distinctive than basil or fennel.

This came in a jar and we haven’t used it in any recipes, but it’s wonderful on bread! The newsletter said

we like to compare the flavor [of a fresh saskatoon] to a mix of black cherry, chocolate and almond

and while it’s a nice jam, for sure, I wouldn’t say those flavors all come through.

A weird bamboo-esque thing, unpretty to look at and slightly slimy when cut. It’s apparently highly invasive but was not very generously supplied in the CSA — we got only a few stalks. The newsletter compared it to rhubarb and celery, so I used a very easy strawberry-rhubarb crumb bar recipe and made the obvious substitution. But there was so little of it that my using additional strawberries to make up the difference resulted in bars that basically tasted of strawberry. Which was fine, but I could have done that without having to mess with knotweed.

Appetizing clusters of little mushrooms. I forgot about them for a week and then dumped them in the soup with the ramps, which was fine but once again totally obscured any unique flavor they might have had.

Not a terribly successful week in terms of appreciating the uniqueness of these ingredients! I suppose, all things considered, the agrodolce ramps would be the winners as far as tasting good and letting the ingredient shine. Unfortunately even that meal was tainted somewhat by my being a dumbass and eating way too much bread. Will next week be better? Stay tuned!