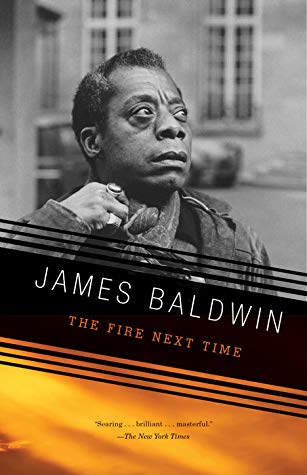 This is the sixth in my series of posts about books I read for Seattle Public Library’s 2019 Book Bingo, which ended on September 3rd; I did get a bingo, but neglected to submit the card before the deadline. Whoops! Anyway, for the “by an author of color” square, I read The Fire Next Time, by James Baldwin.

I was inspired to read this book by the track “BALDWIN” off Jamila Woods’s excellent album LEGACY! LEGACY! and the episode of the Song Exploder podcast where she explained how she wrote it. Woods had an interview with Pitchfork which echoed much of her explanation in the Song Exploder ep:

He talks about white people, and how they don’t always see us as human—but he’s saying, These innocent people, we have to accept them with love. The way Baldwin talks about love is so complex, and it’s always an active choice, but that was always the part of the letter where I was like, Really? It seems very difficult to accept all of these people with love. Accept Dante Servin and [George] Zimmerman with love? That’s a lot, James.

The book The Fire Next Time consists of a pair of letters, “My Dungeon Shook: Letter to My Nephew on the One Hundredth Anniversary of the Emancipation” and “Down At The Cross: Letter from a Region in My Mind.” A version of the former, which differs a bit from the one in The Fire Next Time, can be read at the Progressive.

If I had a hard time writing about No One Will See Me Cry or Hybrid Child because they were kind of oblique and non-linear, I had no such problem with The Fire Next Time. Baldwin’s prose is elegant and straightforward, simultaneously merciless in his clear-eyed indictment of white America and merciful in his ultimate refusal to let that indictment become fuel for hatred. This book is challenging to write about in a different way: if there are hidden or subtle meanings to be teased out here, I — as a white man conversant with but not steeped in American racial inequality — am not the best person to do so. So this will be more a personal reaction to what I read than an analysis of it.

That disclaimer in mind, something that struck me about The Fire Next Time was how extremely (and refreshingly) not written for a white audience it seemed to be. White mistreatment of black people is axiomatic; Baldwin doesn’t cite statistics or relate anecdotes in an attempt to convince anyone of what he knows to be true. By giving up that defensiveness, he’s able to cover a lot of ground in these hundred or so pages, about the consequences of American racism and what it will take to change it.

The first letter, “My Dungeon Shook,” which occupies only about ten percent of the book, is explicitly addressed to Baldwin’s nephew. Despite that, it does serve a sort of introductory role for white readers like myself: This is how it is for us as black people in America; I’m trying to save my nephew’s life, so don’t expect me to sugar-coat it. It’s a bracing and uncomfortable read; ultimately, as well, a hopeful one, but not in a way that will let white readers off the hook. Baldwin doesn’t offer easy solutions or the glib slate-cleaning that many white people seem to hope for. His promise to his nephew is that

we with love shall force our brothers to see themselves as they are, to cease fleeing from reality and begin to change it,

and he must have known, over 50 years ago, what we see now: that this would be an arduous process and white people would by and large be dragged into reality only kicking and screamingTangentially related, here in 2019 is Michael Twitty responding eloquently to some of that kicking and screaming.

“Down at the Cross,” which occupies the vast majority of the book, likewise makes very few concessions to any imagined white reader. Again Baldwin is able to write with great candor about his experience, his knowledge about the treatment of black people in general at the hands of whites, and about the Nation of Islam movement that that treatment gave rise to. When he spells out the prophesy of the white man’s inevitable doom that gives the prophet Elijah Muhammad and his Nation of Islam followers their hope, their influence and their power, we sense that Baldwin is tempted by it. When his retelling of that prophesy culminates in their conclusion that “the sword they have used so long against others can now, without mercy, be used against them,” we sense his hand half-reaching for the hilt. And after he steps back from that tale into his own life — where he once fled a different church, in part, because of a similar bloody-minded division of the world into us, the saved, and them, the damned — the rest of his meeting with Elijah and his subsequent trip across the city to meet with some white friends feels like a kind of long exhalation of a breath caught in acknowledgement of the power of Elijah’s story.

When Baldwin is spinning on the impossibility of convincing Elijah that white people don’t, perhaps, deserve wholesale annihilation, he feels a moment of kinship with the conscious white people he’s come to know:

In the eeriest way possible, I suddenly had a glimpse of what white people must go through at a dinner table when they are trying to prove that Negroes are not subhuman. I had almost said, after all, “Well, take my friend Mary,” and very nearly descended to a catalogue of those virtues that gave Mary the right to be alive.

It’s characteristic of the charity and compassion Baldwin displays throughout The Fire Next Time, of his empathy and his refusal to let the long and bloody history of white people’s aggression entirely cloud his view of their humanity. One wishes that white people were generally better at reciprocating that empathy; making this book required reading in high school would be a good step along that path, but failing that, it’s never too late to start. I can’t think of a person to whom I wouldn’t recommend this book.