A work friend and I were talking about this unfortunate piece of ad copy on Apple’s iOS 8 QuickType web site.

iOS 8 predicts what you’ll likely say next. No matter whom you’re saying it to.

We work in the linguistics group at our company, and among most linguists, prescriptivism is considered kind of a shabby way to look at language. Prescriptivism is basically the stance that one particular way of speaking or writing should be favored over others, and while we can all enjoy a good-natured chortle at Weird Al “fixing” a sign in a grocery store, or the Unnecessary Quotes Blog, it’s both willfully blind to the mutability of language and sometimes very limiting to insist that everything needs to be grammatically “correct” all the time. “Whom” is technically correct here, but it sounds awkward and stilted for a company that likes to keep its products and advertisements approachable and down-to-earth. Using “who” instead might lose Apple points with prescriptivists, but I’d argue that it accomplishes their other goals much more effectively.

But then take this other example, also from the Apple page:

Despite our best efforts not to wield prescriptivism against every text we see, my co-worker and I thought that “And,” at the beginning of a sentence was clunky. (Note that there is a prescriptivist injunction against starting a sentence with a conjunction like “and” or “although,” but we actually only object to the comma.) Is there a rule against starting a sentence with “and” followed by a comma? I don’t know, actually. But I still think it reads badly.

This leads me to the prescriptivist’s dodge: 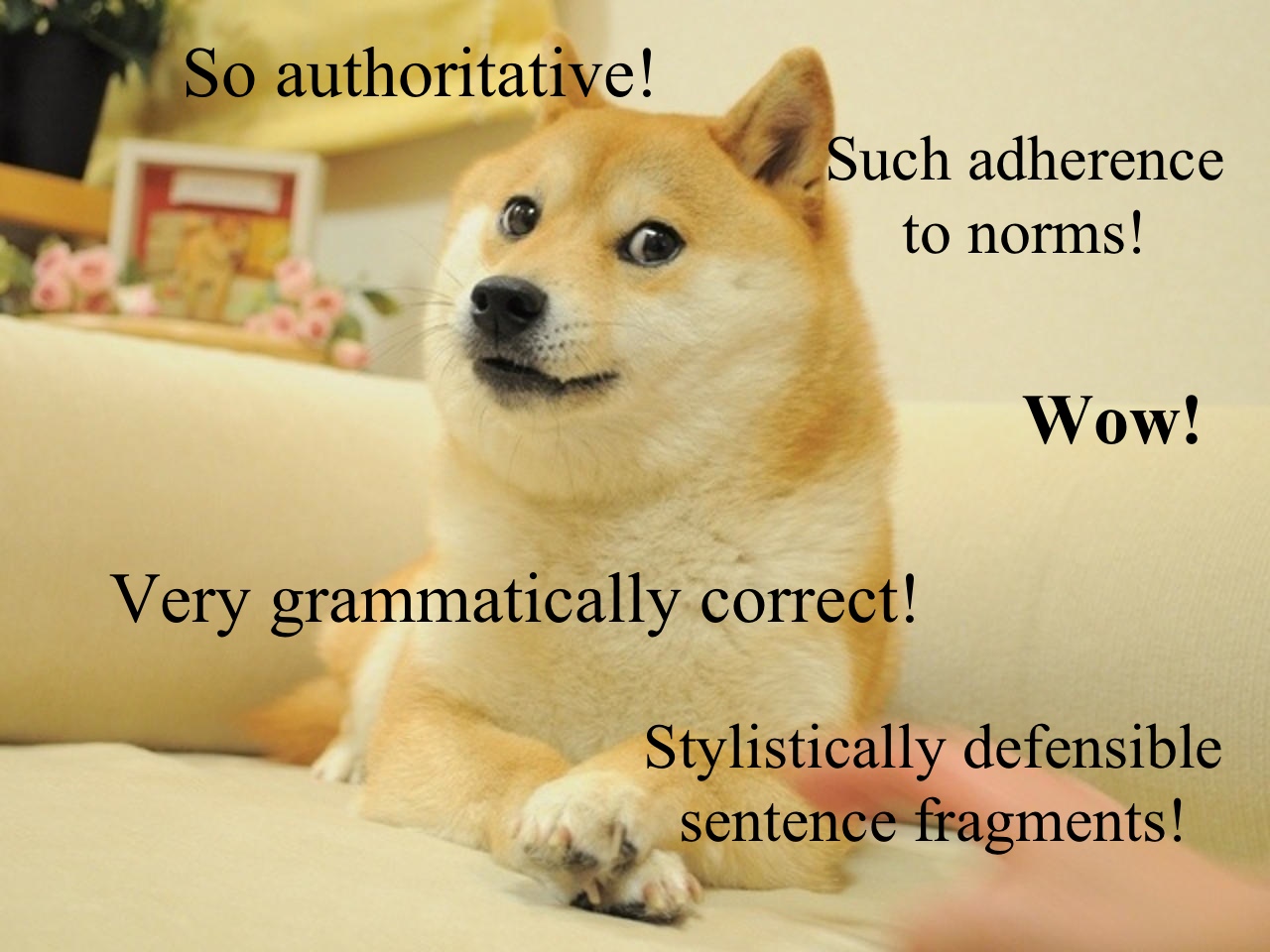 Wait, no, I’m sorry. That’s the prescriptivist’s doge. The prescriptivist’s dodge is objecting to language that happens to be against some prescriptive norm, but not because it breaks that norm. No, the non-prescriptivist would never be so rigid and dogmatic! S/he objects only because this particular transgression—I’m sorry, I mean “choice”—sounds bad. Just adhering to the admittedly arbitrary and archaic rules would, coincidentally, in this one particular case, result in something that sounds better.

Of course, “better” is subjective, and a lifetime of being taught that “correct” grammar is super important and seeing “incorrect” grammar and minority dialects associated with ignorance and stupidity will tend to affect your opinion of what sounds “better” without your having much say in the matter. But the prescriptivist’s dodge lets you continue to enforce fundamentally arbitrary norms without being one of those assholes who comments on Facebook posts being all “I believe you meant ‘its’!”